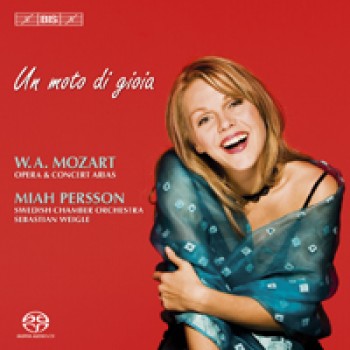 Mozart wrote many of the arias on this disc for specific performers, among them his wife Constanze's two sisters Aloysia Lange and Josepha Hofer (the first Queen of the Night), the English soprano Nancy Storace and Adriana Ferrarese (whose impressive vocal range he put to the test in Fiordiligi's aria Come scoglio).

Here Swedish soprano Miah Persson, on her first solo disc with orchestra, has collected a number of Mozartian gems (including Exsultate, jubilate - actually composed for Venanzio Rauzzini, the star castrato of the Teatro Regio Ducale in Milan.) Purity, sweetness and impeccable grace are words that have been used by reviewers to describe Miah Persson's voice, and with such qualities it is no wonder that her reputation as a Mozart singer is growing.

A farewell scene is played out in the extended concert aria Ch'io mi scordi di te - this one taking place in real life. Intended for Nancy Storace - who had been the first Susanna in the Marriage of Figaro - it was composed for the singer's farewell concert in 1787, before her return to England. The aria includes an extended piano part, performed at the concert in question by Mozart himself, and has been interpreted as his musical declaration of love for the singer. Here it is the young Russian pianist Yevgeny Sudbin - whose recently released Scarlatti and Rachmaninov recitals on BIS have been highly praised - who joins Miah Persson and the Swedish Chamber Orchestra in this portrayal of two lovers at the moment of their parting.