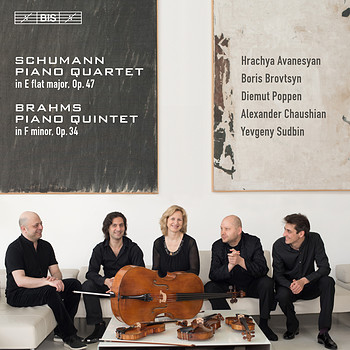 Robert Schumann composed the Op. 47 Piano Quartet in E flat major in his so-called ‘chamber music year’ of 1842, immediately after finishing the famous piano quintet in the same key. Despite the proximity in time and tonality, there are clear differences between the two works: the quintet tends more towards a concertante dialogue between the piano and string quartet while the quartet favours equality between the four parts – even if the cello has something of a leading role among the strings.

Some ten years later, the young Johannes Brahms was entrusted with the task of making a piano four-hands arrangement of the quartet, and it is quite possible that this contact with Schumann’s chamber music for piano and strings opened his eyes to the potential of the genre. In any case, with its almost inexhaustible motivic abundance and captivating energy Brahms’s Piano Quintet in F minor, Op. 34, is one of the most often performed works for these forces. Completed in 1864 it had actually started off as a string quintet which Brahms first reworked as a sonata for two pianos before arriving at the final scoring. Performing these two central works in 19th century chamber music is Yevgeny Sudbin and an international group of eminent string players consisting of violinists Hrachya Avanesyan and Boris Brovtsyn, violist Diemut Poppen and cellist Alexander Chaushian.