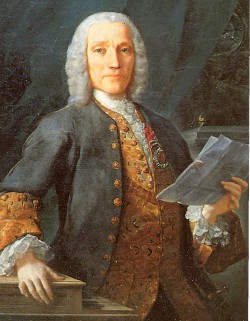 Probably one of the most outrageously individual compositional outputs of the Baroque era is to be found in the keyboard sonatas of Domenico Scarlatti. Scarlatti was born in 1685, in the same year as J. S. Bach and Handel and two years earlier than Rameau. His sonatas pose an exception to most "rules" in musical history. Unlike so many other compositions, it is impossible to trace at all clearly the influences on which their style depends. They stand out undoubtedly as Scarlatti's own, highly original inventions. Some parallels can be drawn with Frescobaldi, C. P. E. Bach or Handel, but very few. We can only imagine how alien the sonatas must have sounded at the time that they were written and it is small wonder that they were nicknamed, somewhat misleadingly, "original and happy freaks". The poet Gabriele d'Annunzio compared them to "a necklace which breaks, producing a resounding hail of glistening pearls rolling around and bouncing about like precious bubbles of watery beauty"; a more reasonable comparison. To me, they seem like an assortment of diverse guests at a masquerade, where the conflict of a disguised character with the real individual behind the mask amplifies the almost schizophrenic duality which seems apparent in virtually all of Scarlatti's sonatas.

Domenico Scarlatti was born in Naples, the son of the composer Alessandro Scarlatti who was one of the direct forerunners of Mozart in opera writing. Domenico found his own voice through the miniature art of the Baroque sonata - composing about 555 of which only thirty were published during his lifetime. For the first 33 years of his life, while still under influence of his father and of the Neapolitan opera and church music of the time, the young Scarlatti wrote nothing of real significance. But from 1719, when he left home and was appointed to the royal court in Portugal, his life began to take an entirely new route. One of Scarlatti's responsibilities at the court was the education of Maria Magdalena Barbara, who was to marry into the Spanish royal family in 1729 and who became Queen of Spain. The 44-year-old composer followed his young pupil and patroness to Seville and later to Madrid, where the court settled permanently in 1733, to continue the lessons. He was never to return to Portugal. The atmosphere was rather gloomy at the court and, as a remedy, Maria Barbara asked for a regular supply of fresh sonatas. At the age of 50, Scarlatti's muse finally awakened and it was then that the miracles started to take shape in the form of at least 555 sonatas - an almost unparalleled legacy in the history of music.

As an Italian artist, Scarlatti took the opportunity to explore Spanish folk music and popular rhythms in their original form when he moved to Spain. His sonatas vividly reflect the colourful and emotional Iberian way of life: the fire of flamenco, the click of castanets, the strumming of guitars and the thump of muffled drums. And yet they manage to retain many Italian elements, not infrequently preserving the bel canto style. Scarlatti undertook frequent excursions to Cádiz and Granada, where life was rich in Moorish sensuality and there was an oriental touch to the Andalusian chants. One can identify the bitter wail of a gypsy lament (in K20, K426 and Sonata in G minor, which lacks a "K" number since it does not appear in Kirkpatrick's catalogues), the overwhelming gaiety of the village "orchestra" (in K435 and K492) and the wiry tension of the Spanish dance (K455 and K429). K435 and K455 embody extreme changes of mood: roaring, noisy passages as well as passages that seem filled with bliss. Both mandolins and castanets are heard. Some repeated note-figures are so tricky that one almost suspects Scarlatti of having turned to his advantage the nuisance of the rattling keys of some worn-out harpsichord on which he may have had to play. The hemiolas give them an extra rhythmic flavour. K492 and K20 alternate lyric echoes of the Italian Opera and mock tears in ascending scales with breathless scherzando leaps. In the moments of uncertain tonality, the basses often move in cautious stepwise progressions "like a fencer jockeying for position, cling to pedal points like a quivering cat about to spring, or roll from side to side of a dominant like a dancer maintaining movement in a limited space", as Kirkpatrick put it so eloquently. K365 and K448 are polyphonic and demonstrate unusual harmonic shifts. Persistent calls are sounded in the repetitive broken 5ths. The contrast between a regular pulse and its sudden displacement in K427 and insistent syncopations in K545 (left hand) can be rather exciting. Some of the pieces are as desiccated and lean as a sun-baked Mediterranean scenery (K406), while others descend into impressionistic transcriptions of day-to-day life, church bells, howls in the streets and abrupt gunshots (K492, K435 and K427).

K487 is grandiose in style with wind instruments clearly heard in the opening. The piece is characterized by the interplay of huge octave leaps in different registers. Sometimes trumpets, horns, strings, woodwinds, and drums merge into a grand jumble at the finale of the sonata, with the addition of bells. The tessitura and accumulation of sound, as implied by the composer in the texture, is enormous. K429 is a naughty piece: sustained harmony in the opening carefully examining possibilities before a nifty improvisation which takes us to the most diverse harmonic spheres later in the piece. K30 is one of Domenico's five fugues. It was nicknamed the Cat Fugue because of the bizarre intervals of the subject. It is said that Scarlatti was inspired to elaborate on the projected theme by hearing his cat walking about on the keyboard. An intriguing story, but in practice, only an unusually accurate super-kitten could manage to avoid stepping on the neighbouring keys (I have tried this unsuccessfully with my own kitten). In any case, polyphony served Scarlatti primarily in underlining poignant harmonic shifts and their tormented journey towards redemption, as in K87. Similar in mood, K466, consists entirely of series of cadences, which Scarlatti manipulates with such wizardry as to form a continuous and sustained piece. The unusual modulations have here become the nucleus of the poetic imagery that he uses to transport the listener between different harmonic worlds. In K24 Scarlatti is at his coarsest and most uninhibited. This firework display is an orgy of luminous reverberations and shrill guitar strumming.

Keeping Scarlatti's circumstances in mind, we can only speculate on the reasons for the experimental nature of the sonatas. Probably because he composed all of his sonatas for the Queen, who by all accounts was a brilliant performer, and because he wasn't seeking popularity or commercial profit, he could allow his imagination free flow. It is astonishing how rarely Scarlatti repeats himself in the sonatas. The musical material is sometimes similar, but each sonata is like a new and highly demanding innovation. This certainly doesn't make it easier to narrow down a choice to only 18 sonatas to represent the enormous spectrum of diverse characters: from the savage to the refined (K545 to K365) or the flashy to the meditative (K24 to K197). Both the Queen and Scarlatti were extraordinary harpsichordists and had great improvisational skills. It is very plausible that for each of the notated sonatas, there were 50 or so other versions. This says a lot about the spontaneity and variety essential to performance of the pieces. When Scarlatti decided to publish a set of sonatas, which he called 30 Essercizi per Gravichembalo, this is what he wrote in the preface in 1738:

Reader,
Whether you be Dilettante or Professor, in these Compositions do not expect any profound Learning, but rather an ingenious Jesting with Art, to accommodate you to the Mastery of the Harpsichord. It was not self-interest or ambition which led me to publish them but obedience. Perhaps they may please you, in which case I may more willingly obey further commands to gratify you in a simpler and more varied style. Therefore show yourself more human than critical, and then your Pleasure will increase. Vivi felice.

The human aspect of the performance of the sonatas must have been of great importance to Scarlatti. He was also quite worried that the published set might turn out to be too difficult. But the kind of flamboyant variety and emotional maturity that followed in the next sonatas makes the 30 Essercizi seem like a walk in the park. Some vigorous, often frankly unnecessary hand-crossings - as in K27 and K24 - disappear in later sonatas. According to some sources, this was due to the Queen's corpulence with age which made it increasingly difficult for her to cross hands in a graceful manner. So Scarlatti had to restrain himself from this potentially hazardous way of writing.

So far, despite the complete absence of the autograph manuscripts, evidence suggests that the 555 sonatas were conceived only within the last 20 years of Scarlatti's life. It is impossible to establish the proper chronological order. Ralph Kirkpatrick makes a strong argument that because many sonatas were copied out in pairs in some manuscripts, they should be played in pairs, so as to complement each other (like K406 and K407 on this recording). However, although coupling two movements together was a common practice among Scarlatti's Italian contemporaries, the fact that the sequence of the sonatas varies greatly from one manuscript to another makes it hard to prove this argument conclusively. There is also evidence that at the time, Baroque sonata movements were frequently performed separately. The true importance of perceiving movements of a sonata as an organism emerged only with the arrival of the Classical sonata form.

The sonatas were by no means as popular in the 19th century as they were to become in the 20th. Chopin assigned some of Scarlatti's sonatas to his pupils, who weren't at all enthusiastic. Though Chopin himself had often expressed his conviction that Scarlatti would soon be played in concerts as part of a standard repertoire, this did not happen until Franz Liszt and Clara Schumann started to include the sonatas in their regular recital programs from around 1838. Finally, in 1839, the first "complete" edition of Scarlatti sonatas was published in Vienna, edited by Czerny, who noted in his preface: "It was Liszt who gave the first impulse to this undertaking". But it wasn't until Horowitz's time that the sonatas became known on a much wider scale. Suddenly, the sonatas found their brisk way into the repertoire of great pianists like Hess, Michelangeli, Haskil and Lipatti as well as that of great harpsichordists of this period. Interest in Spanish music in general had already begun to grow and the audiences' fascination with the Iberian ingredients so well preserved in the sonatas became even more apparent.

It came to my attention that harpsichords in Scarlatti's time had a typical range of about 4 octaves, but that some of the sonatas (especially the later ones) demand a larger span of at least 5 octaves. Further, the colours and moods implied as well as the kind of keyboard technique required (which was possessed by very few harpsichordists at this period) are so advanced that I can't help but wonder whether the composer was somehow anticipating the modern piano. Or maybe he merely had the spirit and effect of the music in mind, eager to explore and transform the instrument beyond its standard confines into orchestral sounds. Somehow I find that, because of their innovative language, there is a foreshadowing in these sonatas of the efflorescence in musical literature which was to come decades later. Or maybe it is precisely because of the subsequent rich musical bequest that our ears can now appreciate the sonatas in a new and different way.