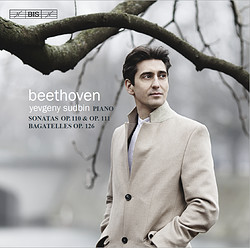 'What you are, you are by accident of birth; what I am, I am through my own labour. There are and will be a thousand princes; there is only one Beethoven!'

This self-assertive statement addressed by Beethoven to his steadfast patron Prince Lichnowsky offers a glimpse of the tumultuously temperamental personality that many of us associate with the composer. But he clearly also had a very different, contrasting side to him which I find of great interest: warmth, generosity and worldly wisdom – with unexpected outbursts of cheeky humour – which all shine through his music, are also unmistakably among Beethoven’s qualities and particularly evident in the works on this recording.

Beethoven’s penultimate piano sonata Op. 110 in A flat Major, is part of a triptych formed by his last three sonatas, composed and worked on in parallel between 1820 and 1822. They are, if you will, his last ‘hurrah’ (but a restrained one) in the piano sonata genre. An unmistakable feature that characterize most of his late works is Beethoven’s ability to condense intense thought and brief musical utterances into the essence of breath-taking musical significance.

This particular work offers a kaleidoscope of contrasting emotions; ranging from a very personal touch of human compassion (first movement: Moderato cantabile Molto Espressivo) to mischievous and edgy humour and typically Beethovenian, impatient outbursts (second movement: Scherzo – Allegro molto), it miraculously transforms from painful, earthly lament and despair into pure triumph in the closing movement (Adagio ma non troppo – Allegro ma non troppo).
Interestingly, as Alfred Brendel has pointed out, all the main themes of the sonata are in fact derived from the hexachord – the first six notes of a diatonic scale – together with a third and a fourth, the two intervals which it can be divided into. Another fun subject for a dinner conversation is the observation that the themes in each movement tend to begin with a phrase covering the range of sixth.
With the geeky stuff out of the way, let’s focus on the music. The vocal nature, generosity and reflective beauty of the theme that starts the first movement are highlighted through Beethoven’s marking: con amabilità (‘with kindness’). This is followed by delicate, pearl-like arpeggios spanning four octaves up and down the keyboard. The unhurried pace and the apparent simplicity of this movement are notoriously difficult to achieve as voicing and long, architectonic shapes become the primary challenge.
By contrast, the highly rhythmical, eccentric mischievousness of the second movement, comes somewhat as a shock. Here, the temperamental Beethoven is clearly in his element. As is often the case in Beethoven’s music, it is difficult to tell whether his tantrums are pretend or real, since they are often followed by a ‘But I didn’t mean it that way!’, as in the syncopated left hand that almost sounds ‘jazzy’ or the somewhat ludicrous, downward cascades of the middle section. The humorous element in this movement is emphasized by Beethoven using melodies from two popular German songs: “Unsa Kätz häd Katz’ln g’habt” (Our cat had kittens) and Ich bin lüderlich, du bist lüderlich (I’m a slob, and so are you). It is not immediately obvious what the connection is between the two songs but I am working on it.
The closing, multi-sectioned third movement (twice the length of the other two movements combined) is a masterpiece in its own league, divided between the world of operatic lament full of poignant sadness in Arioso dolente – Klagender Gesang, (written in 12/16 and opening with a reference to ‘Es ist vollbracht’ from Bach’s St John Passion), and the search for hope in the fugues that follow, with the assertion of victory at the end. A particular feature of Beethoven’s powers of invention at this juncture is the ability to intensify and gradually increase the density of pure sound, whether it is through texture, counterpoint (in the fugues), flamboyant use of trills, the pedal or by any other means possible: if the performer understands the effects intended, he will find a way to achieve them. A notable example of this occurs just before the second fugue, where the same G major chord is repeated no less than nine times (increasing in volume and pedalled through). G major of course is as far removed from the original key of A flat as is possible.
More tribute is paid to Bach throughout the movement. The fugue is presented three times in different guises: the second time around the theme is an inversion of the first and the third features the simultaneous augmentation and diminution of the theme, striving for unity towards the end. But he is also present in the Arioso, where Charles Rosen points out that Beethoven’s use of leading, harmonically dissonant notes as appoggiaturas is a way of inducing a feeling of being stricken with deep grief. The sorrow deepens further in the second appearance of the Arioso (L’istesso tempo di Arioso), which resigns almost completely and can barely speak. At this point the earlier reference to Bach’s depiction of the death of Christ becomes apt, as well as the implication – that G major chord! – that redemption will eventually follow). Of interest in this context is perhaps also the reminder by Beethoven’s first biographer, Alexander Thayer that Josephine Brunsvik, Beethoven’s earlier and possibly deepest love, died in March 1821.
Temperament resurfaces again, but this time with more impetus in the thirty-second and last of Beethoven’s sonatas, Op. 111 in C minor. This work sets out to be a departure point from conventional sonata form but, more importantly, it leaves all that is physical behind and ascends into the realms of a purely spiritual experience. The emotional struggle takes hold immediately, with the leaps of the diminished sevenths intervals which come crushing down in the opening ‘Maestoso’ section of the fateful first movement. The monumental beginning has inspired many, including Chopin, who quotes it in the opening of his second piano sonata.

It wasn’t immediately apparent that this sonata was going to take place among Beethoven’s greatest works, or indeed among the greatest works in the whole of piano literature. After it had been completed in January 1822, Beethoven’s publisher Schlesinger inquired gently what had happened to the missing third movement to which Beethoven replied that he had no time to write the last movement. This must have been a sarcastic comment: it becomes abundantly clear that the composition is pure perfection in both its structure and development and does not ask for any more music to be played after the last note has died out.

The main body of the first movement ‘Allegro con brio ed appassionato’ is permeated by fugal material which adds to its internal struggles. In fact, Beethoven had originally sketched the main theme as a fugue, which explains why he retained many of those elements. As is often the case with Beethoven (especially when he composes in his ‘home key’ of C minor) the white heat takes over and burns all the way to the surface of the music with pure abandon. It is only in the closing passage of the movement that some sort of resolution or acceptance of the inevitable takes place – the resolution into C major forming an otherworldly transition to the Arietta of the next movement).

There is a vague resemblance between the Arietta theme and Diabelli’s waltz which Beethoven used for his famous set of variations, completed just a year after the sonata. Here, however, the theme is entirely transformed. Transcending the notes and even the sounds that are available on the piano, the movement is a masterful exercise in architectural shapes. Just as it is almost impossibly difficult to shape the first theme, so it becomes a challenge to shape each variation to come without losing the concept of the whole. Each variation is of growing complexity, and – in the case of the first three – of growing intensity too, with Beethoven employing a technique of ‘rhythmic diminution’ - progressively doubling the number of notes in each beat, as he heads towards the syncopated third variation. It has been noted by many that the quirky rhythms in this variation seem to forebode jazz improvisation.

The fourth variation almost brings back the theme, accompanied by the murmurs of the thirty-second notes in the left hand and then answered by the celestial sounds of the right hand. This is where the piano sound merges into a rainbow of pure colours (composed of harmonies and the overtones of those harmonies) while the notes themselves become almost of secondary importance. The music accelerates further towards the double trills, modulating from C major to E-flat major – where the climax of the piece takes place. A brief interlude leads almost imperceptibly back to C major and into the coda. Here, the theme melts once again into pure harmonies accelerating further into chains of trills and finally resolving into silence at the end. The effects achieved in this movement go some way beyond standard aural perceptions as the blend of harmonies take on various shapes to fool and hypnotize the senses, producing quite an extraordinary, all-encompassing experience.

Beethoven’s Bagatelles op. 126, showcase another outstanding example of compositional paradox: supreme mastery within a small format. Beethoven composed this cycle of trifles, as he described the set on a sketch of the first Bagatelle, just after he had finished the 9th Symphony and while working on one of his late String Quartets op. 127. In a letter to the publisher Schott he wrote about the Bagatelles: …some of which are rather more polished, and may well be the best of this kind of thing that I have ever written. The great magnitude of motivic invention, the interplay of characters and the juxtaposition of free fantasy and polyphonic rigour in these six pieces add up to a different kind of dimension of musical ideas that transcends their miniature form. We don’t often perceive Beethoven as a ‘painter’, yet his deep understanding of how colours can be reproduced on a piano is truly remarkable. Again, the use of various tools (including, in almost every bagatelle, the blending of harmonies where appropriate, pedalling, voicing and many others) make these pieces a wonderful challenge for any pianist (whether he performs on modern pianos or period fortepianos).