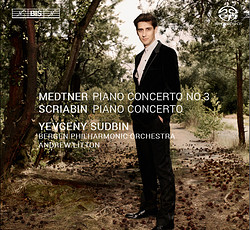 Alexander Scriabin (1872–1915) and Nikolai Medtner (1880–1951) came from a similar musical background. Both studied composition at the Moscow Conservatory under Taneyev and piano under Safonov (amongst others) around the same time – although Medtner was the younger by eight years. Both were highly gifted pianists who focused their compositional output mainly on the piano and both eventually left Russia (although Scriabin later returned).

This is where the similarities end, however, because neither the personalities of the two composers nor their two concertos on this disc could be more different from each other. In fact it has been fascinating to see how the pairing of the works changes the perception (and in my opinion enhances the overall experience) of both concertos. I initially had reservations recording either of them. My main concern was that it could prove very hard to find an orchestra and conductor with the same determination to make the pieces work, as both are far from straightforward and require a lot of rehearsal time. In addition, they are not the most accessible to the audience (although it is actually only Scriabin’s final movement that can sound all over the place), and particularly Medtner’s concerto (like most of his music) begins to really open up and sink in only after repeated listening. This is not to say that these concertos are in any way inferior works; in my opinion both are absolute masterworks – unjustly underperformed and constantly underappreciated. However, because they are so radically different on pretty much every level, some of their perceived weaknesses and peculiarities play in their favour when you listen to them both in one sitting (notice for example how Scriabin’s over-orchestrated and emotionally overpowering final movement enters the sea of calmness and clarity of the opening theme of Medtner’s concerto: the subsequent purposeful orchestration and the logical development and treatment of various themes will suddenly seem novel and like a breath of fresh air).

The fact that these concertos were written by contemporary composers but 45 years apart (Scriabin wrote his in 1896 at the age of 24 and Medtner started composing his Third Concerto in 1940, at a mature 60) not only suggests that both composers must have been at very different stages of their artistic development but would also seem to indicate that the later concerto should be much more modern, especially given the radical advances and changes of fashion that took place almost on a weekly basis during this period. Nothing could be further from the truth: Scriabin was always a visionary, as well as a self-proclaimed messiah, and even though his concerto seems deceptively ‘harmless’ by comparison with his later works, paradoxically it still sounds more experimental, daring and ‘modern’ than Medtner’s Third.

Anyone familiar with Medtner’s music will know that he really ought to have been born about a hundred years earlier in order for musicologists to fit him into the annals of music history and prevailing fashions. His die-hard fans (including myself) will, however, also understand that this is by now highly irrelevant as the high quality of his compositions is timeless… As Sorabji wrote: ‘Like Sibelius, Medtner does not flout current fashions, he does not even deliberately ignore them, but so intent going his own individual way is he that he is simply unconscious of their very existence… he has made for himself, by the sheer strength of his own personality, that impregnable inner shrine and retreat that only the finest spirits either dare or can inhabit.’

Alexander Scriabin: Piano Concerto in F sharp minor, Op.20I feel it is a mistake to think of this concerto, as many do, as being derivative of Chopin (some describe it as ‘Chopin’s Piano Concerto No.3’). It is true there are a few seemingly Chopinesque elements (such as the almost mazurka-like rhythm in the last movement and the general fluidity of the piece). Nevertheless, the harmonic shifts and schizophrenic modulations (for example in the last movement), and the heavy romantic sweep and abrupt mood changes carry Scriabin’s distinct musical signature. The last movement is in fact more akin to the dance of the devil than to any Chopin mazurka with its innocent poignancy. Even the sweeping string melody spinning out underneath the piano accompaniment in the beginning of the first movement is more reminiscent of Rachmaninov, if comparisons are to be made. The climax in the same movement and the brief but voluptuous cadenza are also so overly Romantic and thunderously dramatic that Chopin would have had to consume a deadly dose of LSD in order to write anything close to it.Scriabin’s feel for inducing colours, to him interchangeable with harmony (he did not actually have synaesthesia, but developed his own system based on Newton’s Optics lined up with the circle of fifths), can be clearly experienced in the ‘bright blue’ F sharp major of the central movement, Andante. It is written in the form of variations where the theme contains some of the simplest and purest music since Mozart – it is sometimes claimed that Scriabin was eleven when he first conceived this theme. The shimmering piano accompaniment could only have been written by someone with unparalleled foresight as to the colour-world of the pianos to come; the colours that can be extracted from this texture on a modern piano fill one with tremendous satisfaction and gratification that the movement exists.

It is in the final (and longest) movement that Scriabin exerts his individuality with neither Romanticism, Impressionism nor atonality dominating. Throughout the movement, there is a feeling that the soloist has to find a way to be either heard or, at least, followed by the orchestra; the scoring is extraordinarily heavy and the rhythmic changes are insanely difficult to shape into a coherent structure. Involving soloist, orchestra and conductor, it is however this tension, between light and darkness, chaos and order, ecstasy and excruciating pain (sometimes combined into one), that makes the piece unmistakably Scriabin. After the glorious coda and the overwhelming sound of the brass the concerto concludes with three consecutive F sharp major chords where once again the soloist seems disconnected from the orchestra (or given independent powers, depending on how one looks at it), as the duration of the chords in the piano part differs from that of the orchestra.

Comparing the personalities of Scriabin and Medtner is amusing and one could not possibly imagine the two becoming friends of any kind. Medtner was quiet and withdrawn, dignified and down-to-earth, while Scriabin was anything but down-to-earth. In fact he even carried out ‘flying experiments’ with his wife, attempting to transport their bodies through the air, and he once tried walking on the waters of Lake Geneva. He did nothing to dispel mystery or to discourage any attention directed at himself. All this may sound as if I’m being satirical but credit has to be given to Scriabin, who came up with the concept of vzlyot (‘flight’ or ‘upsurge’) in music – something which can be experienced in the floating, always upwards-striving, glorious second subject of the last movement.One can only speculate about the perplexity with which Medtner must have regarded Scriabin’s late music and his ideas concerning devil worship, exorcism, mysticism and ‘practising sorcery’ in connection with playing his own music. Taking a Michelangelesque ethos to heart, Medtner for his part was convinced that the ideas he was putting down on paper already existed somewhere in one shape or another. They just needed to be captured by someone and given substance – a case of plagiarizing God, as it were.

In the words of the Russian philosopher Ivan Ilyin: ‘Medtner’s music astonishes and delights… you may fancy that you have heard the melody before… But where, when, from whom, in childhood, in a dream, in delirium? You will scratch your head and strain your memory in vain: you have not heard it anywhere: in human ears it sounds for the first time… And yet it is as though you had long been waiting for it – waiting because you “knew” it, not in sound, but in spirit. For the spiritual content of the melody is universal and primordial… it is as though age-long desires and strivings of our forebears were singing in us; or, as though the eternal melodies we had heard in heaven and preserved in this life as “strange and lovely yearnings”, were remembered at last and sung again – chaste and simple.’Nikolai Medtner: Piano Concerto No.3 in E minor, Op.60Technically, Medtner’s concertos are anything but simple; this is especially the case with his third, subtitled ‘Ballade’. It is not that there are too many notes: as in some of Rachmaninov’s music, there are plenty, but they all have a clear musical and thematic reason for being there. When it comes to an analysis of the texture, the concerto is somehow more Germanic than Russian, but – much like Scriabin’s music – to speak of it in terms of nationality is to entirely miss the point: the concerto is much more than any nationalist elements one might attribute to it.

Even though Medtner was a master of sonata form (‘born with sonata form’, as Taneyev frequently described him), the concerto’s structure is highly complex. It is composed as if one is never meant to ‘crack the code’ of its overall structure, written as it is in three movements, yet intended to be played without a break (a physically and emotionally demanding proposition). It works perfectly as a whole, however: the first movement is flexible in tempo, a collection of ideas that flow freely and without interruption from one section into another. It is like speech: elastic, fluent and considered, while the piano always remains interactive with various instruments in the orchestra, without becoming disruptive (as it is on occasion in Scriabin’s concerto). Richard Holt called it ‘enchanted’, moving in a kind of dream world, ‘with occasional intrusions of human passion and conflict’. The second movement, an Interludium, lasts only a minute and a half and serves as a link to the final movement, Allegro molto, which climaxes in a coda.

The main theme, appearing for the first time in the third bar of the first movement played by the horns, becomes an obsessive element through its insistent rhythmic quality as it appears in various guises throughout the work. It provides a tremendous drive and ultimately unifies the concerto, which is a masterpiece, a perfection in both form and emotional impact. ‘Why nobody plays Medtner?’ Horowitz often exclaimed. We still haven’t found the answer.