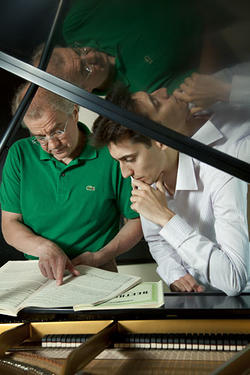 A strong feeling of trepidation has always accompanied my arrival in the twin cities of Minnesota.

I still remember experiencing it the very first time I was invited to work with the Minnesota Orchestra back in 2007. My record company, BIS has a habit of surprising me – usually with good news, and this time was no exception: 'No pressure, but we’d like you to record all the Beethoven concertos, should Osmo like you'. The last part seemed particularly nebulous and slightly frightening. In fact, after the orchestra finished recording the cycle of Beethoven symphonies to huge critical acclaim, they were indeed looking for a pianist to record all the Beethoven piano concertos.

Meeting Osmo for the first time left a distinct impression. For a soloist, the outcome of collaborations with conductors of great stature – while excellent for CVs – can also be good for the financial welfare of your shrink, as such highly unpredictable events and the resulting possible fallouts from personality clashes may require professional treatment afterwards. This may sound entirely over the top to the inexperienced and unsuspecting but I can assure you those risks are real and they do increase the higher up the ranks an orchestra finds itself, and Minnesota is certainly among the highest ranked orchestras in the US, where you are likely to be presented a maestro with a personality resembling a grand bazooka.

While ‘grandness’ may sometimes lie in the eye of the beholder, the beholder of the eye often happens to be the maestro or maestra – whichever the current least offensive form is – in question, and that distinction only exacerbates matters. A quick assessment of probabilities made me aware that scores, batons, shoes and even furniture may once again find themselves in mid-air; even though over the years I learned to look forward to such 'exciting' collaborations, because they at least leave you with great stories to share with your friends later. In this context, it was actually less perplexing to be greeted with the message 'please leave your guns at home' (I usually do), or something to that effect, inscribed on the entrance doors of the Orchestra Hall.

With that in the back of my mind, I made my way to the hall the next morning to meet Osmo Vänskä for the first time, the then chief conductor of the Minnesota Orchestra. With my eyelashes still stuck firmly to my forehead, partly due to disbelief and partly due to the 'mild' February weather of -20C that Minnesota is famous for, I was almost disappointed when Osmo strode into his office where I was warming up: he seemed…somehow completely normal, very easy to talk to, and above all quite human (most of the time anyway: being an avid motorcycle aficionado, Osmo’s appearance could occasionally be mistaken for an invader from a distant alien civilization).

Other than that, his personality is a unique mixture of contrasts: upbeat, energetic yet composed, while quietly drawing you in; saying a lot, with very few words. There was no sign of an over-inflated ego anywhere, no big posturing or excessive gesturing.

This initial meeting with the conductor alone, prior to the first rehearsal, is one of the most important moments of the whole collaboration process in my opinion. A lot of conductors tend to skip it, unfortunately, if they are pressed for time, which they often are. Not only are first impressions important, but it is this preliminary 'smelting' of ideas, that ultimately is going to connect the soloist and the orchestra on stage, via the vital bridge: the conductor. If the 'smelting' isn’t working, then at least the meeting will determine the extent of the 'maximum damage' that will be done in the concert. (Often it’s just like the mating ritual of the praying mantis: since your head is going to be chewed off anyway, you might as well sit back and enjoy the process.)

Not so with Osmo. After the comments received from playing a few sections from the concerto, I exhaled with relief – and with my head still firmly in place – at how closely his ideas coincided with what I wanted from this concerto. In fact if everything falls into place, it can go further: when you are imprisoned for hours inside the practice room with nothing but yourself and the instrument, there comes a point when you feel you could hit a wall because the most obvious solutions become somehow the least attainable. It is at times like these that a slight nudge from an external source, like a conductor, can make a difference. But it takes someone who perceives the piece in similar colours.

So it was like a breath of fresh air to hear the Emperor (in my opinion an unfortunate nickname for the concerto provided by someone other than Beethoven) played with a fresh and lively flair, never losing direction by becoming too pompous, tired and self-indulgent. It alleviated my frustrations built up from previous experiences. In any case, our first meeting provided me with all the confidence needed to march into the first rehearsal, knowing that the conductor and I will be fighting on the same side.

I remember one hairy moment, in the last movement, where I was getting ahead of the orchestra. Osmo stopped, and I offered to bring the tempo down. Osmo’s reply was: 'Don’t! We can do it!' And how they could do it – the sound and vitality of the orchestra almost blew me off the stage once the tempos were matched.

This is exactly the kind of excitement that electrified me when I first heard their Beethoven symphonies. It is too easy to opt for safety and convenience, especially when rehearsal time is limited. In fact, during the five years or so of working with this orchestra, I couldn’t spot anything the orchestra couldn’t do, or found inconvenient to execute, at least not with Beethoven. It’s not that Osmo’s working style is overly demanding. It is very demanding, focused, and highly strung, both in rehearsals and recordings (which is a very different process altogether). But, like a wrongly prepared Martini, you feel stirred inside, without being shaken and challenged to the core. He would never lose his cool, where others might resort to totalitarian tactics (which should by now be surely a ghost of the past), whenever something wasn’t going to plan. This type of mutual respect between musicians, unblocks the flow of one’s potential rather than strangles it.

That same evening, after the first rehearsal, during a dinner with the sponsors of the orchestra, Osmo announced that the pianist for recording the Beethoven cycle would be me. It was a good day.