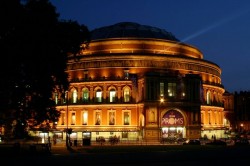 Sudbin is in an Altared State
"Sudbin has all the strength, brittleness and languor that Rachmaninov's music demands; if much of the First Piano Concerto is about hard muscle, the marvellously liquid tone that he produced in quieter passages showed his sense of fantasy in full flight.
The BBC Philharmonic under Yan Pascal Tortelier fulfilled the role of an adoring companion, agreeing with everything Sudbin had to say."
-- Nick Kimberley, London Evening Standard

"From the opening octave cascades to the tender warmth of the first theme, and on to its filigree development, Sudbin's playing had the delicacy of the composer's own of this work, and his dynamics were calibrated with comparable finesse. Abetted by Yan Pascal Tortelier and the BBC Philharmonic, the second movement's Chopinesque mood came gracefully across, while the springtime charm of the closing allegro was irresistible."
-- Michael Church, The Independent

The Thrill of the Chase
"The slow movement slides a seemingly nonchalant melody over dreamy chords that have become clichés at the hands of smoochy hotel bar pianists, but Sudbin played it straight. The last movement went like a rocket. Here the soloist excelled, his youth confident in its delirious speed, the orchestra panting in the excitement of the chase."
-- Rick Jones, London New Statesman

"Sudbin's playing in itself was something to be relished. It had fluency, energy and power, harnessing the music's expressive lyrical characteristics and also showing that the pianistic virtuosity is there not just to dazzle but also to form an integral part of the musical discourse." Related Link
-- Geoffrey Norris, The Daily Telegraph