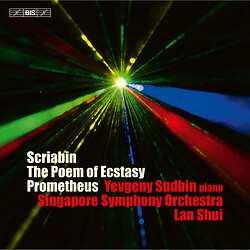 A new release of Scriabin's Prometheus, Fifth Piano Sonata and Poem of Ecstasy is now released!

"One would be remiss not to acclaim Yevgeny Sudbin in both Prometheus and the Fifth Piano Sonata. He has the perfect gleaming tone for this music, powerful and tight without a hint of harshness, along with a fine sense of rhythm. Scriabin’s main melody in the sonata has a built-in lopsided wriggle to it, just a touch sexy. Sudbin instinctively gets it right. This is an outstanding release in every way." Steven Kruger, FANFARE