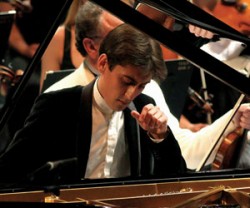 Following his recent debut at the BBC Proms - described as 'sublime' in the Daily Telegraph (UK) - Yevgeny Sudbin took the opportunity to sign a new contract with BIS. He is planning to record 14 discs over the coming seven years. The Sudbin-BIS collaboration has so far resulted in three hugely-acclaimed solo recitals with works by Scarlatti, Rachmaninov and Scriabin, as well as a concerto disc which combines the first works in the genre by Tchaikovsky and Nikolai Medtner. On the strength of these, and his many live appearances, he has already been hailed as 'potentially one of the greatest pianists of the 21st century'. The next title, a coupling of Rachmaninov's Piano Concerto No.4 in its original version and Medtner's Piano Concerto No.2, will be released in Summer 2009.