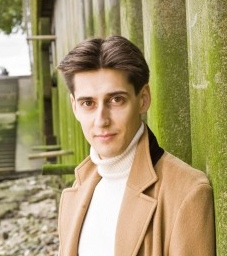 New York, NY - March 16th, 2009. We caught up with pianist Yevgeny Sudbin at the opulent Fifth Avenue residence of one of his patrons, as he was passing through NYC on an intense worldwide tour. Rarely seen on an early Monday morning, and during one of his rare days off no less, the tall and sensitively-drawn twenty-eight year old Adrien Brody of the pianistic world revealed himself to be a gentleman of consummate warmth, wit, steely strength and humanity.

In a few days, Sudbin will be making his début with San Francisco Symphony performing Beethoven's Fourth Piano Concert under Vladimir Ashkenazy. Current projects include concerts and recordings with North Carolina Symphony with Grant Llewellyn, performances and recordings of the complete Beethoven Piano Concertos with Minnesota Orchestra under Vänska, and the London Philharmonic Orchestra in the RFH series under Neeme Järvi.

NOTR: Could you describe the different musical and creative environments of each city you've lived in?

Ok, I can try! Well, Russia is very, very disciplined. My four years of study there were quite intense. I remember we had to learn so much repertoire in a very short space of time. You had to be a really quick learner. I was going through different recital programs every 3 months, and we had to play constantly. There was a huge focus on practicing and learning new music.

When I went to Berlin, I was more relaxed, but I had much more pressure from the academic side. It was quite an exciting time because the wall had just come down. Now it's a very nice place, somewhat positive. But when I moved there with my family in 1990, the city was very chaotic. Everything was changing and people were wondering what would happen. In terms of musical life, Berlin was always quite a colorful city, and still is. I think it benefited me to be a part of that change and excitement. I spent around seven years there.

When I was sixteen, I left for London on my own. It was the biggest city after St. Petersburg that I'd been to. I was quite overwhelmed when I arrived. I remember it was busy, and everybody looked quite angry somehow, yet at the same time polite and reserved! I found English mentality at first very peculiar, but now I find myself much more at home there. Even if people are not as straightforward as, for instance, in Germany. This is a big generalization, but in Germany, people just say what they mean, and there isn't so much talk "around." But in England people don't exactly say what's on their minds, so you have to guess from little words they insert here and there.

The musical life is so intertwined nowadays - you go to Germany and there are a bunch of Russian musicians, and I'm sure it's the same in New York. It's hard to distinguish "Russian School / Russian style" or "English School / English style", or German School / German style. It's all one big world now - people mixed, and musical styles mixed.

NOTR: We loved your Mozart cadenzas and arrangements of Rachmaninov! And the essays. Could you talk about the creative process of finding something of your own to say, while being inspired by these great composers?

As a child I used to compose a little bit, and somehow I don't have time anymore. It's something I always wanted to do more of, but performing itself is a full time profession, and I don't want to write something half-baked. Maybe if I take some time off I might pick composition up again and write more. At the moment I only write liner notes and program notes, and I enjoy doing that because it really gives me a chance to find out more about the composer I'm working on, and a chance to express in words some ideas other than in playing music. It's quite fun to do!
Transcriptions and cadenzas come quite naturally to me, and it's not as demanding as composing so I can do it fairly easily. In the past, pianists always played their own cadenzas anyway, and in a way I find that the approach to classical music in the past was also much more personal.

Now it seems sometimes like it's become more of a "job." I've just looked at some cadenzas for Beethoven's Fourth, out of curiosity. There are around twenty by famous pianists. But I really love Beethoven's own cadenza. I would never impose my own if there is already a really great piece of music. And it's very hard to follow Beethoven's longer cadenza, but it really fits. It has a perfect shape and structure. I'm doing it later this week at my debut in San Francisco with Ashkenazy and San Francisco Symphony. I'm also recording all the Beethoven concertos, and might write my own for the first concerto, because there isn't a really convincing one.

With Mozart, some concertos, like the C major K467 don't even have a cadenza. So people either play other pianists' cadenzas, like Lipatti's or they compose their own. I think the option of composing your own is a very good idea. It's like creating a little mirror image of what the performer feels about the concerto himself, when he has a chance to directly express it!

NOTR: You have some beautiful photo series from South Africa and Mozambique posted on your website -

Ah - you even saw that! I wasn't actually big on animals before I went to South Africa, but it just happened. I went there and saw this amazing country with its incredible variety of animals and nature and it completely blew my mind away. I would say that it was to some degree a life-changing experience. People of South Africa say that, "once the South African bug bites you, it will stay in your blood!" And I felt exactly this way after I left - I had the urge to go back and see it again right away.

Just being on safari and being allowed to watch animals in their natural environment is indescribable. I'd never seen something like that before. South Africa is a country where I'm not sure I'll be invited for concerts, so I chose to go there on my honeymoon because I wanted to visit somewhere different. My wife and I flew to Johannesburg, and then took a small plane to a lodge. It felt like we were the only people on the planet because we didn't really see many humans for the whole trip. We then spent a few days on a remote island in Mozambique.
South Africa was just animals and nature, which was incredible.. You wake up at five o'clock in the morning; then go on a game drive. What you see in the morning is particularly inspiring because animals are most active in the morning and at night. So that's when you go out on safari. The animals are not at all bothered by the cars and vehicles. In the first 24 hours we saw all big five- buffalo, lions, leopards, elephants and rhinos... they all had cubs too, which was amazing. We saw a mother leopard desperately trying to protect her cubs from hyenas, lions feasting on antelopes and cheetahs hunting. We visited some villages, and there was even a music school with lots of children learning music. I really want to go back. Also - one day I would love to visit India...They have tigers! Among other things.

NOTR: What kind of camera do you use?

I have a Nikon D60. It's my first SLR. I love photography, but if you go to South Africa, you don't really need any skill - the light is perfect, the animals are there, you just click! I have a telephoto lens for zooming in, and a wide-angle for landscapes. The ranger who drove us around in his Landrover was also a photographer himself, so he gave me masterclasses in photography.

NOTR: Tough schedule! We had a peek at your calendar - that's a lot of travel.

Yes. It's a luxury that I have two days off right now. In this upcoming April and May, I have a concert almost every other day. I'm going to Kansas the day after tomorrow, then San Francisco and Vancouver, and so on. The travel is the most wearing part of the profession - playing, in comparison, is somehow a relief: you get on stage and you can actually breathe! But the actual traveling is really tiring.

NOTR: Do you have a routine that helps you get through your life on-the-go?

Not really. I'm not really a "vitamin" person ...I don't know. You know what makes me feel better? - It's some familiarity, like seeing friends in the different places I go to.. I hate being alone. As a solo pianist, you're just basically always on your own. Even if I talk to lots of strangers, it's not the same as it's just small talk.

NOTR: What are some of your favorite cities?

I really like the West Coast - Vancouver and Seattle are among my favorite cities. And I really look forward to going to San Francisco. On the top of my to-do list the next time I'm in Vancouver: watching bears catch salmon. Apparently bears come down from the mountains to feed and walk around people's gardens.
The nature is incredible in the Pacific Northwest. Last time I went to Vancouver, my concert was on a very remote island and I had to get there by waterplane They have hundreds of islands there - and there was a huge snowstorm that nearly caused me to miss my New York debut! It was really adventurous.

NOTR: Are you reading any good books at the moment?

I don't really like reading fiction - I don't find it engaging. I like biographies. I recently re-read Rachmaninov's biography, and also found Medtner's life quite interesting, especially since he also spent so much time in London. I was working on Scriabin again recently and read some more Russian material on him.

I LOVE good food. Whenever I'm in New York, I crave eggs benedict and I have to have it. There's a really good brunch place called Norma on 58th St - and they keep pouring the orange juice there, which is nice... and they give you smoothies. Their eggs benedict are amazing!
In London we have a great Indian restaurant near my house in Stanmore- it's homestyle cooking, nothing fancy (I think making Indian food "fancy" tends to spoil it). In NYC I also really love Japanese restaurants.

Evgeny Kissin - I grew up with him being on TV and radio, and when I was young, he was always my idol. After I was introduced to him at Verbier Music Festival some years ago, I couldn't speak for an hour - I was stunned. I don't remember the details - although I do remember he is incredibly intelligent. You can talk to him about anything. He knows many of the Shakespeare sonnets by heart.

I'm now waiting for somebody to introduce me to Grigory Sokolov, he's not known as much in the States as in Europe, but he is fantastic . After every concert, I come out physically drained, like I've run for 5 miles. It's just an incredibly exhausting and intense experience. He's in his own world when he plays, and you feel grateful that you can temporarily become part of that world.